The last thing Braves fans want is for this series to go seven games.

This might be a different year, but the 2020 NLCS between the Braves and Dodgers — when Atlanta blew a 3-1 advantage vs. Los Angeles — is still fresh in everyone’s minds. After going up 3-1 on the Dodgers in this year’s series, the Braves lost Game 5 11-2, the final game before the two sides play up to two in Atlanta.

Both teams will turn to starters who are looking to erase memories of their previous outing. The Dodgers hand the ball to Walker Buehler, who is pitching on short rest. (Scheduled starter Max Scherzer was scratched because of arm fatigue.) He started Game 3 and lasted just 3 2/3 innings, allowing four runs — two earned — on six hits, with three walks and three strikeouts.

Atlanta will turn to Ian Anderson, who started Game 2. He went three innings, allowing two runs — both earned — on three hits, with three walks and a pair of strikeouts.

Despite the short starts, the Dodgers and Braves won the respective games in which Buehler and Anderson pitched.

Both pitchers delivered standout campaigns during the regular season. Buehler emerged as a Cy Young candidate, pitching to a 2.47 ERA with a 26 percent strikeout rate and a 6,4 percent walk rate in 207 2/3 innings. Anderson pitched to a 3.58 ERA in 128 1/3 innings as a rookie, fanning 23.2 percent of opposing batters and walking 9.9 percent.

Sporting News will provide live inning-by-inning updates and highlights of Dodgers vs. Braves. Follow along as Game 6 of the NLCS unfolds at Truist Park in Atlanta.

11:33 p.m. End of Eighth: Riley goes down swinging. Will Smith is coming in hoping to send the Braves to the World Series.

11:31 p.m.: Albies strikes out swinging. Freeman takes second on the stolen base, and Riley will now bat for the Braves with two in scoring position and two away.

11:29 p.m.: Freeman is given an intentional pass to bring Albies to the plate with runners on the corners.

11:28 p.m.: Rosario gives one a ride to deep center, but Bellinger catches it for the first out. Heredia advances 90 feet to third on the flyout.

11:25 p.m.: Guillermo Heredia comes in to pinch run for Soler with Rosario due up.

11:24 p.m.: Jorge Soler, pinch-hitting for Matzek, leads off the bottom of the eighth with a hustle double, just sliding in at second on the hit to left.

11:16 p.m. End Top Eighth: Matzek gets Smith to ground out and the Braves are three outs away from going to the World Series.

11:14 p.m.: Matzek continues his run. He gets Seager swinging on a slider for the first out.

11:10 p.m. End of Seventh: D’Arnaud is caught looking at strike three on the inside to strand Swanson at first.

11:07 p.m.: Swanson gives the Braves a two-out baserunner by singling through the left side of the infield.

11:03 p.m.: Corey Knebel gets Duvall swinging to start the bottom half of the seventh.

10:54 p.m.: 99 low and away to catch Souza looking for strike three. Betts now takes his chance to hit against Matzek with two outs and two runners in scoring position.

10:45 p.m. Dodgers’ scoring play: Don’t look now, but the Braves are in a tough spot. Pollock doubles down the left field line to score Taylor. Pollock on second, Bellinger on third. No one out and Braves manager Brian Snitker is going to the bullpen. Braves still lead 4-2.

10:41 p.m.: Jackson walks Bellinger on four pitches. Pollock steps up to the plate as the tying run in the top of the seventh.

10:39 p.m.: Taylor greets Luke Jackson with a leadoff double off the left-field wall.

10:35 p.m. End of Sixth: Treinen paints 99 mph on the corner to catch Riley looking and strand the bases loaded.

10:30 p.m.: Albies takes a walk, and Vesia’s night is over. Three walks for him, and now Blake Treinen will come out to face Riley with two out in the bottom of the sixth.

10:25 p.m.: Make it back-to-back walks out of the bullpen for Vesia. Freeman takes his free pass, and now Albies is up with the Braves looking at another potential two-out RBI opportunity.

10:22 p.m.: Rosario takes a full-count walk. Freeman will bat with a runner on first and two away.

10:17 p.m.: Camargo flies out, and with Rosario due up, Dodgers manager Dave Roberts will pull Graterol and bring in Alex Vesia.

10:14 p.m.: D’Arnaud comes up empty on a slider from Graterol. Johan Camargo will bat for Minter.

10:11 p.m. End Top Sixth: Minter gets Smith swining to end the top of the sixth.

10:08 p.m.: Incredible play on both sides of Turner’s groundout. Riley makes a nice play on a weird hop to third base, and Freeman saves him on the other end with a pick at first for the second out.

10:07 p.m.: Minter paints a 97 mph fastball on the low, away corner to catch Seager looking for strike three.

10:01 p.m. End of Fifth: Pederson is hit by a pitch, but Swanson lines out to third on the next pitch.

9:56 p.m.: Brusdar Graterol comes in out of the bullpen for the Dodgers.

9:53 p.m. End Top Fifth: Betts goes down swinging to end the top of the fifth.

9:50 p.m.: New pitcher for the Braves, A.J. Minter, gets Albert Pujols to swing at the changeup for strike three. Pinch hitter Andy Burns will officially end the night for Buehler.

9:43 p.m. End of Fourth: Buehler avoids any more runs coming across by getting Albies to chase a high pitch. Braves now on top by three.

9:40 p.m. Braves’ scoring play: There is no stopping Rosario. He launches a three-run homer to right to put the Braves ahead 4-1. Braves take a 4-1 lead.

9:35 p.m.: Adrianza delivers a double down the right field line that reaches the corner, but D’Arnaud is held up at third. Rosario will come up to bat with a pair of runners ins coring position.

9:33 p.m.: D’Arnaud walks with two out. Ehire Adrianza comes in to pinch hit for Anderson, ending his night after four innings. Final line in those innings is three hits, one run, one walk and four strikeouts.

9:29 p.m.: Strange play during Pederson’s at-bat as he rolls one down the left-field line, but only after the ball hit him twice for a foul ball. Pederson goes down swinging a few pitches later for the first out.

9:24 p.m. End Top Fourth: Pollock pops out to third, but Bellinger’s single ties up the game.

9:21 p.m. Dodgers’ scoring play: Bellinger slaps one the other way against the shift, and the speedy Turner has no problem scoring from second. Dodgers tie the game 1-1.

9:18 p.m.: Taylor comes up empty again on that low changeup. Anderson now an out away from stranding two runners in the fourth.

9:13 p.m.: Smith grounds a base hit against the shift, singling to right to give Taylor a chance to hit with runners on first and second and only one away.

9:10 p.m.: Turner walks with one away. Dodgers have their top burner on the basepaths with Smith due up.

9:05 p.m. End of Third: Buehler gets Duvall swinging to end the third and strand a pair of Atlanta baserunners.

9:03 p.m.: Riley picks up his second hit of the night as he lines a base hit through the left side. Runners on first and second for Duvall.

8:59 p.m.: A nine-pitch at-bat ends with a full-count walk to Freeman with one away.

8:52 p.m. End Top Third: In Game 2, Anderson was pulled after three innings. Doesn’t seem like that will happen this time. He gets Betts to ground out to third to end the inning. Three scoreless now for the Braves’ rookie.

8:51 p.m.: Foul-tip on the changeup sets Buehler down for the second out. Betts will now try to drive in Pollock with his team facing two outs in the third.

8:49 p.m.: Rosario appears to lose a lineout in left in the lights, but he regroups in time to make the catch for the first out. Buehler to the plate now.

8:48 p.m.: A.J. Pollock sends a liner out to center, and Duvall slips trying to field the ball on the bounce. Pollock moves up to second for a leadoff double.

8:42 p.m. End of Second: Buehler gets his counterpart to strike out swinging and end the second inning.

8:41 p.m.: Travis D’Arnaud reaches on an infield single to Turner that took a sliding grab to stop.

8:40 p.m.: Buehler has his first strikeout of the night as he gets Dansby Swanson to chase the slider for the second out.

8:38 p.m.: Joc Pederson lines the first pitch he sees against the shift, but right at Seager, who was playing in his usual position at short. 113.2 mph exit velocity on that one.

8:35 p.m. End Top Second: Another 1-2-3 inning for Anderson, who gets Cody Bellinger to line out to Albies, playing just to the right of the second base bag in the shift.

8:33 p.m.: Anderson gets Chris Taylor to chase the low changeup for the strikeout.

8:27 p.m. End of First: The Dodgers won’t allow any more runs to score as Buehler gets Adam Duvall to fly out to center, but the Braves take an early lead.

8:22 p.m.: Ozzie Albies nearly leaves the yard, but will settle for a loud double off the right-field wall. That ball came off the bat at 102.8 mph and went a projected 380 feet.

8:18 p.m.: There is just no stopping Eddie Rosario. He lines a base hit the other way to lead off the bottom of the first for Atlanta.

8:14 p.m. End Top First: Anderson gets Trea Turner swinging for the third out of the inning.

8:10 p.m.: Mookie Betts flies out to center field for the first out of the game.

8:09 p.m.: Ian Anderson’s first pitch is a strike on the upper-inside corner to get this game underway.

7:42 p.m.: According to ESPN Stats & Info, should Los Angeles win tonight, they would tie the Royals (1985-2014) for the most wins while facing elimination at eight.

The Dodgers enter play having won 7 straight games when facing elimination, trailing only the Giants (10) and Royals (8) for the longest streak in MLB history. pic.twitter.com/SVqABkya9Y

7:15 p.m.: The starting lineups for the Dodgers and Braves on Saturday.

The Dodgers vs. Braves game is scheduled to start at 8:08 p.m. ET on Saturday from Truist Park in Atlanta.

How to watch Dodgers vs. Braves

TBS will continue its coverage of the National League postseason with the airing of NLCS Game 6. Brian Anderson will be calling play-by-play with Ron Darling and Jeff Francouer serving as anaylsts.

In Canada, all postseason games are available on Sportsnet and SN1.

TBS will handle the broadcast for all NLDS games in both series.

TBS will continue its National League playoff coverage with coverage of every NLCS game.

MLB Network and FS1 will carry all the ALDS games, until potential Game 5s, which would be broadcast exclusively on FS1.

Fox and FS1 will split coverage of the ALCS.

Every World Series game will be on Fox. 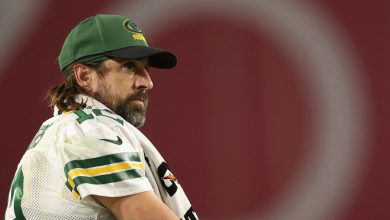 Here’s why the Cowboys always play on Thanksgiving, explained 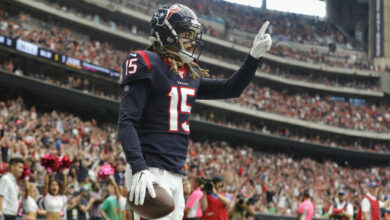 Where is ‘College GameDay’ this week? Location, schedule, guest picker for Week 15 on ESPN