As of this summer, joining an all-star superhero team will no longer require a personal invitation from Samuel L. Jackson in an eyepatch.

Marvel is headed to Disneyland, with the all-new Avengers Campus set to open in Disney California Adventure Park on July 18. The massive Marvel area is the latest addition to Disney’s ever-growing collection of attractions, coming just a year after the debut of its Star Wars-themed Galaxy’s Edge. And just as that space promised a ticket to an immersive galaxy far, far away, Avengers Campus will welcome visiting recruits into a small corner of the sprawling Marvel Cinematic Universe.

Last week, EW was among a handful of press outlets invited to tour the still-under-construction Avengers Campus and get the scoop on all things super. The opening is still several months away, and it shows: At the moment, hidden behind fences emblazoned with the Stark Industries logo, you’ll find little more than rough building shells, exposed beams, and scaffolding. But as you tromp through the mud, it’s hard not to imagine a Quinjet perched on top of that building, or Spider-Man swinging from that roof just overhead. This is Disney’s attempt to bring the world of Marvel off the screen, out of the comics, and into the real world.

Marvel has had a Disneyland presence before, and as of right now, visitors can already meet heroes like Captain Marvel, Captain America, and Black Panther or ride the already-up-and-running Guardians of the Galaxy – Mission: Breakout! (which replaced the old Tower of Terror several years ago). But Avengers Campus is something far more ambitious. The goal isn’t just to let you say hi to your favorite heroes; it’s to help you work alongside them and write your own comic-book-worthy origin story. Maybe you’ll help Peter Parker stop a swarm of skittering robots. Maybe you’ll go through the rigorous Dora Milaje training program. And maybe you’ll tap into your mystical side and learn some wizardry from Doctor Strange. This isn’t a top-secret, restricted facility like S.H.I.E.L.D. HQ. Avengers Campus is open to all, and they’re actively looking for new recruits (a.k.a. Disneyland visitors) to join their ranks and prove their heroism.

Located where the old A Bug’s Land used to be in California Adventure, Avengers Campus is considerably smaller than Galaxy’s Edge, but it still squeezes in tons of Marvel geekery. The entire space is one cohesive area, divided into distinct zones: The Guardians of the Galaxy are already represented with Taneleer Tivan’s cosmic tower and Mission: Breakout, but there’s also the main Avengers building, a mystical outdoor Sanctum, the high-tech Pym Test Kitchen, and the newly established Worldwide Engineering Brigade, a.k.a. WEB. (During our tour, one Disney Imagineer compared it to a college campus, with several distinct fraternities and sororities.)

Here, EW breaks down all the different areas and heroic opportunities, as well as what to expect when Avengers Campus officially opens its doors this summer.

Avengers Campus isn’t a meticulous recreation of places we’ve already seen on film; instead, it’s something totally new — and kind of old. The story goes that back in the 1940s, Tony Stark’s father Howard erected a Stark Motors factory here in California, and decades later, everyone’s favorite billionaire-playboy-philanthropist has transformed the site into a place for the Avengers to recruit and train young heroes. (Marvel loves a good acronym, so the “Campus” name stands for Centralized Assembly Mobilized to Prepare, Unite, and Safeguard.)

The centerpiece is the massive, shiny headquarters, topped by a gleaming Quinjet. It’s similar in design to the HQ we’ve seen in the films, but this is its own, unique building. “That’s part of the reason why we wanted to create Avengers Campus as a brand-new place in the universe because then it doesn’t matter your level of fandom,” explains Jillian Pagan, staff writer for Walt Disney Imagineering. “You’re all coming in at the same level. You all can explore a brand-new place together.”

There are embedded Easter eggs for the diehard fans who can name every Infinity Stone, as well as the newbies who don’t know their Iron Men from their Ant-Men. There will be plenty of heroes on hand, too: Visitors will be able to meet and interact with Iron Man, Spider-Man, Black Widow, Black Panther, Okoye and the Dora Milaje, Ant-Man, Wasp, Doctor Strange, Groot, Gamora, Star-Lord, Captain America, Captain Marvel, Thor, and Loki. A few of the heroes even dressed up specially for the occasion: Marvel Studios head of visual development Ryan Meinerding helped design a new, park-exclusive suit for Spider-Man and new Mark 80 armor for Iron Man.

And since every superhero needs a villain, Avengers Campus will mark the debut of Taskmaster, the classic comics foe who’ll be joining the MCU in the upcoming Black Widow movie. The masked menace has a photographic memory and the ability to instantly copy his opponents’ fighting styles, and depending on when you visit, you may witness a dramatic showdown between the Avengers and Taskmaster on the roof of HQ. (Many of the stunts and fights were choreographed by the same fight coordinator team who worked on Black Widow.) “That guy has been bedeviling the Avengers for a really long time,” teases Dan Fields, executive creative director for Disney Parks Live Entertainment. “What a great foe to have to outthink and outfight and outmaneuver when he’s making an incursion here in the campus.”

Of course, the presence of certain heroes raises the question: How can Iron Man or Black Widow be here, alive and well, when we last saw them, uh, dramatically kick the bucket in Avengers: Endgame? The answer is the same way Marvel’s been explaining continuity shenanigans in the comics for decades: Blame it on the multiverse! Avengers: Endgame hinges on the idea that you can go back in time and create alternate timelines and universes. Who’s to say that there isn’t another timeline where these particular heroes went west to California and opened Avengers Campus?

Save the day with the Worldwide Engineering Brigade, a.k.a. WEB

The Avengers aren’t the only heroic organization on Avengers Campus. One of the old brick buildings from Howard Stark’s automotive factory has been repurposed by the Worldwide Engineering Brigade — fittingly shortened to WEB. This exclusive, Stark-bankrolled club aims to unite some of the world’s brightest young minds and encourage them to invent new technologies. It’s here that young geniuses like Shuri and Peter Parker might dream up their next invention.

If the main Avengers building is all shiny and chrome, WEB is considerably rougher around the edges. When we toured the site, it was still unfinished, but there were old Stark logos stenciled on the walls, and the brand-new brick was artificially weathered and cracked, as if it had been baking in the California sun for the last 80 years.

WEB is also home to the campus’s main new attraction: an all-ages Spider-Man ride. Officially named “WEB Slingers: A Spider-Man Adventure,” the ride lets visitors team up with Peter Parker to — you guessed it — sling webs and have an adventure. At first, riders enter the WEB building as if they’re there to attend an open house and learn more about the engineering team. Peter’s there showing off one of WEB’s recent inventions, a group of small, drone-like Spider-Bots — which immediately proceed to go haywire and start wreaking havoc.

It’s up to riders to don 3D glasses, pile into small rotating cars called “WEB Slinger vehicles,” and start shooting some webs of their own to help catch the wayward bots. There are no buttons to press or blasters to shoot; every vehicle is equipped with brand-new motion-tracking tech, so all you have to do is extend your arm, the way Spider-Man does. (The Imagineers promise that it’s one of those things that’s hard to describe but will feel totally intuitive in person — so we’ll see.)

“We wanted it to feel not like there was a special device that had these powers, but you had these special powers,” explains executive creative director Brent Strong. “Early on, our goal was: How do we make the interface disappear? How do we make the interface as transparent as possible, so it feels like you’re web-slinging, and not that you’re wielding a web-slinger?”

When we visited, the Imagineers were coy about who might be voicing WEB Slinger’s version of Spider-Man, but since then, Disneyland’s announced that Tom Holland will be lending his voice to the ride. (He’s not the only MCU actor to make an appearance in the land, either: The Guardians of the Galaxy and the Collector himself, Benicio del Toro, already pop up during Mission: Breakout.)

And although Spider-Man is the main hero hanging around WEB, comics fans might notice a few familiar names around the building. After all, a place like WEB would attract some of Marvel’s youngest and brightest engineering minds, so while you’re waiting in line, look for references to brilliant young comic heroes like Doreen Green (better known as Squirrel Girl) or the 9-year-old Lunella Lafayette (a.k.a. Moon Girl).

Much of Avengers Campus is all about the tech, but there’s also a place for the magical and unexplained. Hidden off the main path is an overgrown Sanctum, presided over by Doctor Strange himself. This is no Bleecker Street; this is an ancient temple imbued with magic, and many, uh, strange things happen here.

For the Imagineers tasked with building it, it’s another example of taking an idea from the comics and films and exploring it in a totally different setting.

“We’re not trying to rubber stamp something right out of the film,” explains Heidi Rosendahl, principal color and paint artisan. “We’ve kind of created our own Sanctum here, and [it’s] an open, airy space — very much a contrast to the others that are brick and mortar-type facilities. Everything’s a little bit ethereal, and nature comes into play. It’s going to be a very beautiful transition between day and night.”

Taste the future at the Pym Test Kitchen

If visitors are looking for sustenance in between missions, they have a few options. Over by the Collector’s fortress, Taneleer Tivan himself has opened a stand called Terran Treats, which will feature all sorts of strange, alien edibles (like neon-colored churro spirals and cream puffs). Far more familiar will be the Shawarma Palace cart, a nod to the post-credits scene in 2012’s original Avengers movie. According to the Imagineers, Tony and friends couldn’t fathom the idea of heading west without access to their favorite post-Battle-of-New-York fast food joint, so they asked the restaurant’s owner to open a secondary location here on campus.

But the main restaurant on campus is superhero-owned and operated. At the Pym Test Kitchen and adjacent Pym Tasting Lab, everything on the menu has been sized up or down using Ant-Man and the Wasp’s tech — think gargantuan candy bars or impossibly large meatballs. Even walking into the Test Kitchen is designed to feel a bit like walking into an enormous Quantum Tunnel, with its sleek, scientific design. Overhead, regular-sized pretzels zoom by on a conveyer belt, until they’re zapped with Pym Particles and emerge three times larger.

All of this will be available when Avengers Campus opens its doors in July, but the Imagineers promise that they’re planning long past this summer. (Disney has previously teased a future interactive Avengers ride, set in Black Panther’s Wakanda.) By working with the Marvel Studios development teams, they’ve planted Easter eggs and references for films and Disney+ TV shows that won’t be released for years.

“We always have endless ideas, and thankfully, there’s always more movies, there’s always more comic books,” executive creative director Brent Strong says. “We have more references and inspiration than you could ever hope for, so there’s no shortage of ideas. It’s just a matter of time before they all find their way off the page and into the park.” 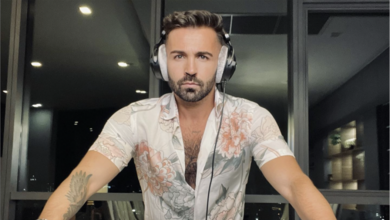 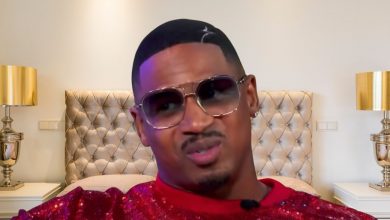 Stevie J Has Woman Pleasure Him During Interview, People Disgusted 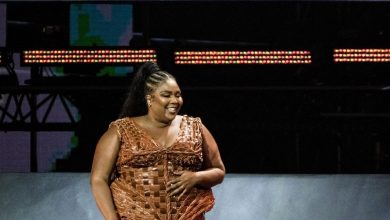 Lizzo Urges Fans To Free Themselves In Love With Nude Pictures 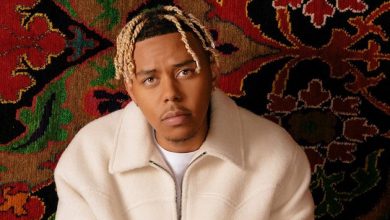