LeBron James paid homage to Takeoff, honoring him with his gameday suit for the Los Angeles Lakers’ clash against the Cleveland Cavaliers on Sunday (Nov. 5), and with a touching tribute in the post-game press conference.

The superstar athlete shared a side-by-side comparison of his fit alongside one of Takeoff’s on Instagram.

“If you know me any then [sic] you know how much I love @yrntakeoff!!” LeBron penned in the caption. “Still doesn’t feel real to me. Rest in Paradise Rocket Man™️!!”

During the post-game press conference, LeBron James shared what Takeoff meant to him, revealing he’s been a Migos fan for “so long.”

“I was listening to those guys my first year with the Heat in 2010. You can ask any one of my teammates back then, they had no idea who the Migos was… I was like ‘I’m telling you these guys are next.’”

He also sent his condolences to Migos, the whole QC family, the Hip-Hop community, and everyone Takeoff touched with his music.

“It’s another hit for our community,” he said before expressing his sadness at losing another Hip-Hop icon. “Every time we get a good moment, we lose another one.”

LeBron James explained to the reporters, Takeoff was the most “quiet, chilled, in the back, ‘don’t want no problems’ type of guy.”

“It’s just another senseless act of gun violence,” he said, adding, “He’s in a better place.”

He also changed his profile picture to one of Takeoff in another tribute to the late rapper. 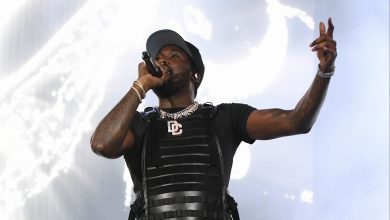 Kanye West Says Gap’s Board Of Directors Got Him Blackballed