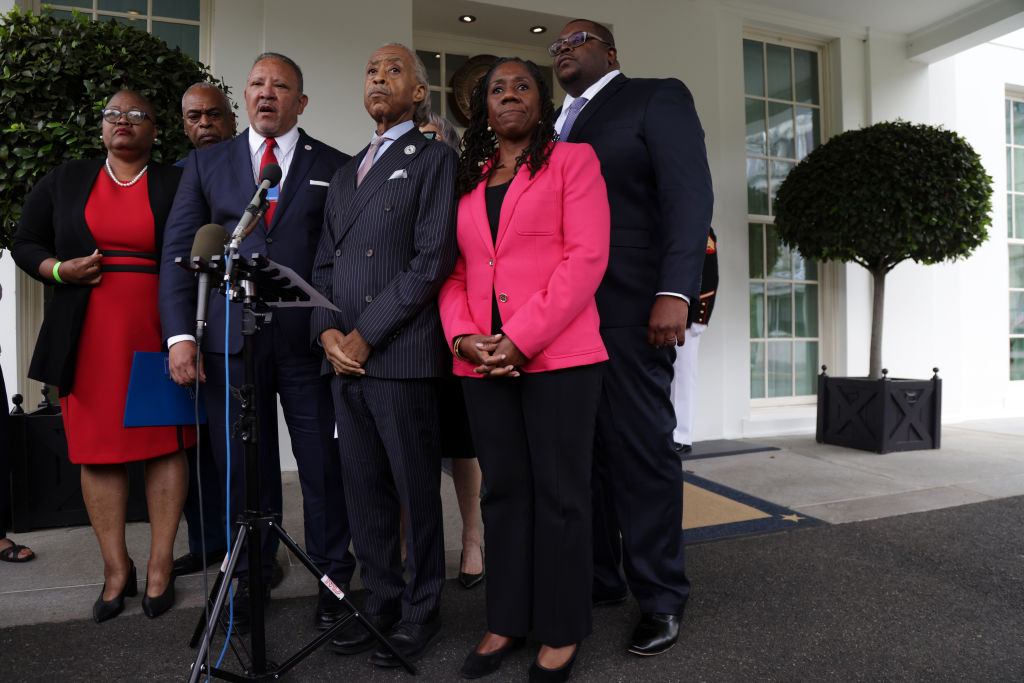 Civil rights leader Marc Morial of the National Urban League speaks as (L-R) Melanie Campbell of the National Coalition for Black Civic Participation, Wade Henderson of the Leadership Conference for Civil &amp; Human Rights, the Rev. Al Sharpton of the National Action Network, Sherrilyn Ifill of the NAACP Legal Defense Fund and Damon Hewitt of the Lawyers’ Committee for Civil Rights Under Law listen at a briefing outside the West Wing of the White House following a meeting with President Joe Biden and Vice President Kamala Harris on July 8, 2021, in Washington, D.C. | Source: Alex Wong / Getty

Most of the civil rights icons whose names we’ve come to know and recognize over the years of Black History Months were fighting to make sure those who came afterward were able to enjoy privileges that have taken decades to turn into a reality.

That includes voting, something that still stymies a good number of Black people through efforts to suppress those rights.

MORE: Where The Party At? Black Voters Are All Dressed Up With Nowhere To Go

Well, the torch that was lit by the likes of Fannie Lou Hamer, Thurgood Marshall, John Lewis and, of course, Dr. Martin Luther King Jr., has been passed — is in very good and capable hands moving deeper into the 21st century. As such, here are five modern-day voting rights heroes everyone should know as Election Day 2020 rapidly approaches.

The co-founder and executive director of the Black Voters Matter Fund, an increasingly influential group working to ensure fair and equitable access to the ballot, has raised his profile significantly in recent years. Not only did his organization play a pivotal role in the 2020 election but he has been a leader within the movement to advance voting rights as Republican-led legislatures look to restrict access. In an interview with NewsOne last summer, Albright explained how his group works.

“Although voting rights is obviously near and dear to our hearts at Black Voters Matter,“ he said, “we didn’t want it to just be about voting rights…But it’s because it’s through voting that we’re able to get action on whatever other items are on our agenda.” 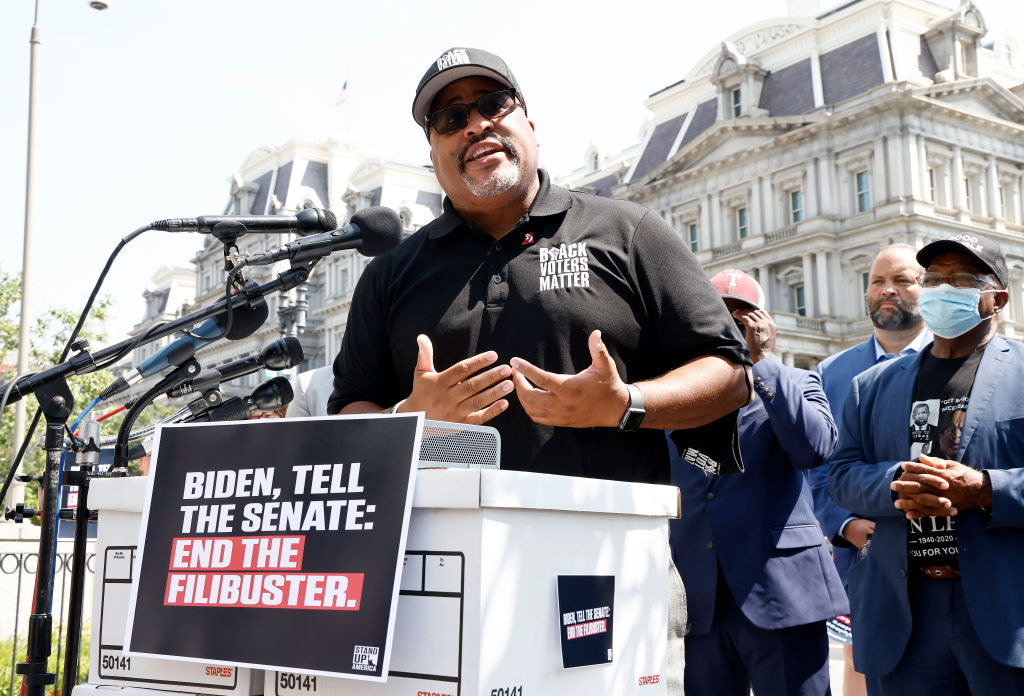 Cliff Albright, Co-Founder of Black Voters Matter, along with Congresswoman Eleanor Holmes Norton and other voting rights advocates from across the country join to deliver a petition to the White House calling on President Biden to leverage the power of his office and publicly urge the Senate to end the filibuster and ensure lawmakers can pass crucial legislation protecting our voting rights near The White House on August 12, 2021, in Washington, D.C. | Source: Paul Morigi / Getty

The president and director-counsel of the NAACP Legal Defense Fund has been working on the front line of the battle for voting rights for years and her relentless push to keep democracy intact has shown no signs of letting up. Ifill — a civil rights attorney and law professor who some think should be nominated to the U.S. Supreme Court — recently underscored her commitment to fair and equitable access to the ballot by writing in an email sent to NewsOne, “Black Americans are facing the greatest assault on our voting rights since the Jim Crow Black Codes rolled back the progress made during Reconstruction. We need sustained and consistent support to fight these relentless attacks on Black Americans’ voices and votes.” 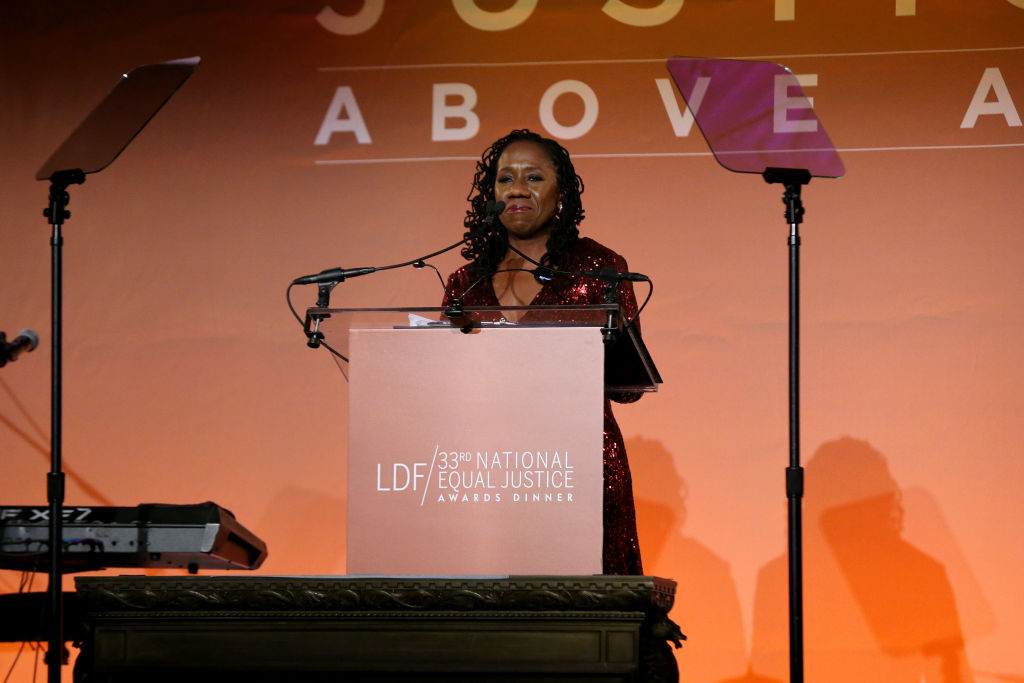 The president and executive director with the Lawyers’ Committee for Civil Rights Under Law is a reliable advocate for voting rights in a role that he has filled seamlessly after his predecessor, Kristen Clarke, was confirmed as the Assistant Attorney General for Civil Rights at the U.S. Department of Justice. Hewitt has been among those pushing for the John Lewis Voting Rights Advancement Act and the Freedom to Vote Act to be enacted to supplement the Electoral Count Act, which “does not address the ongoing pernicious and pervasive racial discrimination in voting nor does it make voting more accessible,” he and other civil rights leaders in the collective National Coalition on Black Civic Participation wrote to Congress last month.

The word “tireless” does not begin to describe the president and CEO of the National Coalition for Black Civic Participation. Campbell has been one of the leading voices working to abolish the filibuster, which has been described as a “racist” Jim Crow relic meant to prevent civil rights legislation from passing. She was among the voting rights activists who called out Democratic Sens. Joe Manchin and Kyrsten Sinema for not voting along party lines to advance voting rights legislation.

“It shouldn’t be two people out of 100 that have that power,” Campbell told the Washington Post about the U.S. Senate after federal voting rights legislation failed to advance last month. “We don’t have any regrets that we kept pushing.” 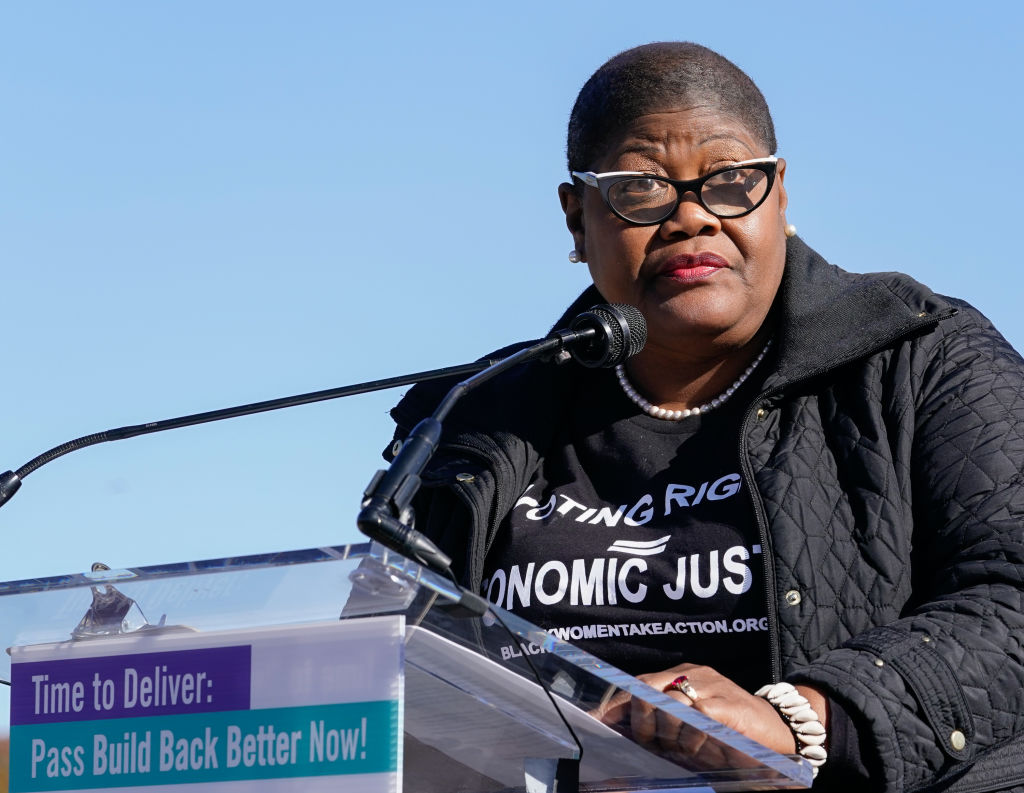 The venerable CEO of the National Urban League has a reputation that precedes him. Morial’s passion for voting rights is both professional and personal, as the former mayor of New Orleans relied on voters to elect him and is now continuing that legacy by pushing for federal voting rights legislation to be enacted. The Urban League partnered with a number of other civil rights organizations to produce a “scorecard” that grades the U.S. Senate on efforts against the filibuster.

“Without the right to vote, we have no seat at the table. With no seat at the table, we can’t impact education, economic, foreign climate, budget, appropriations, policy with respect to children,” Morial told Roll Call last November. “We wanted to dramatize that American democracy is under the most vociferous, hostile, hateful and pernicious attack that we have seen in modern American history. That’s why we did this scorecard.” 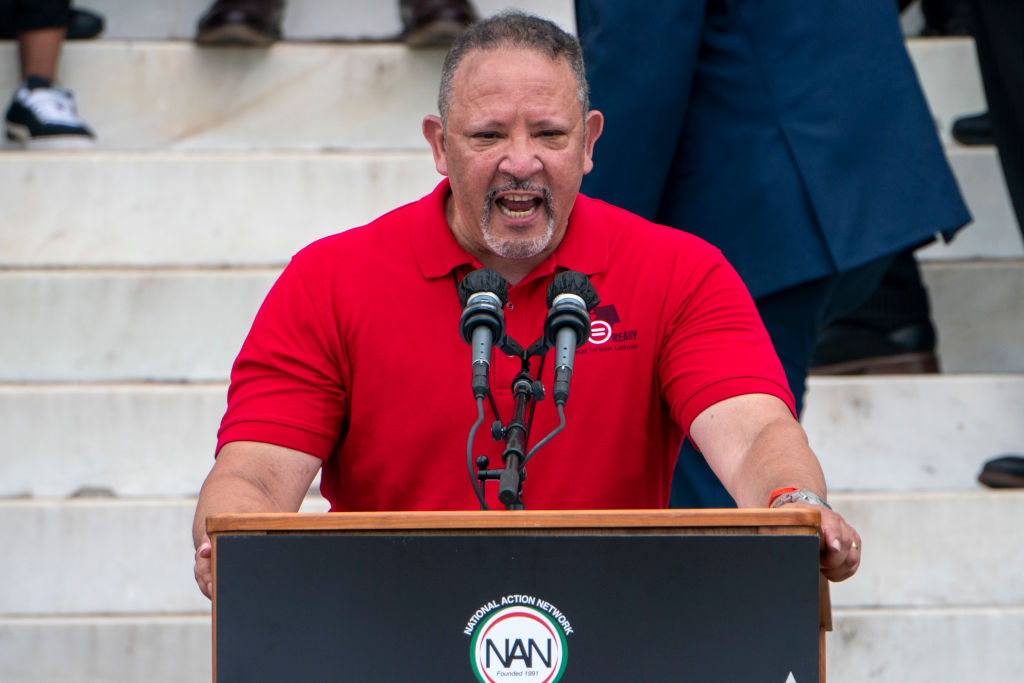 Marc Morial, president of the National Urban League, speaks at the March on Washington at the Lincoln Memorial on August 28, 2020, in Washington, D.C. | Source: Pool / Getty

The following individuals are voting rights icons in their own rights and were included in previous versions of this article.

Bennett runs a nonprofit organization that is devoted to registering “as many Mississippians to vote” as possible ahead of the 2020 election. It has hundreds of volunteers and chapters on multiple college campuses in Mississippi.

“There is a power that transcends our ages,” Bennett once told the New York Times. “We want to dive deep into the veteran stories and learn the lessons of that summer so we can shift the narrative, make our own changes in Mississippi.”

Johnson has been leading the nation’s oldest civil rights organization since 2017. In recent months he testified before Congress about the evidence of voting discrimination he has witnessed.

“Voter suppression has played a huge role in silencing the political voices of the African American community and all people of color historically and during the 2018 midterm election season,” Johnson said at the time. “The NAACP is determined to shape a culture of voting and reach people who don’t vote regularly, especially those who believe their votes don’t matter.” 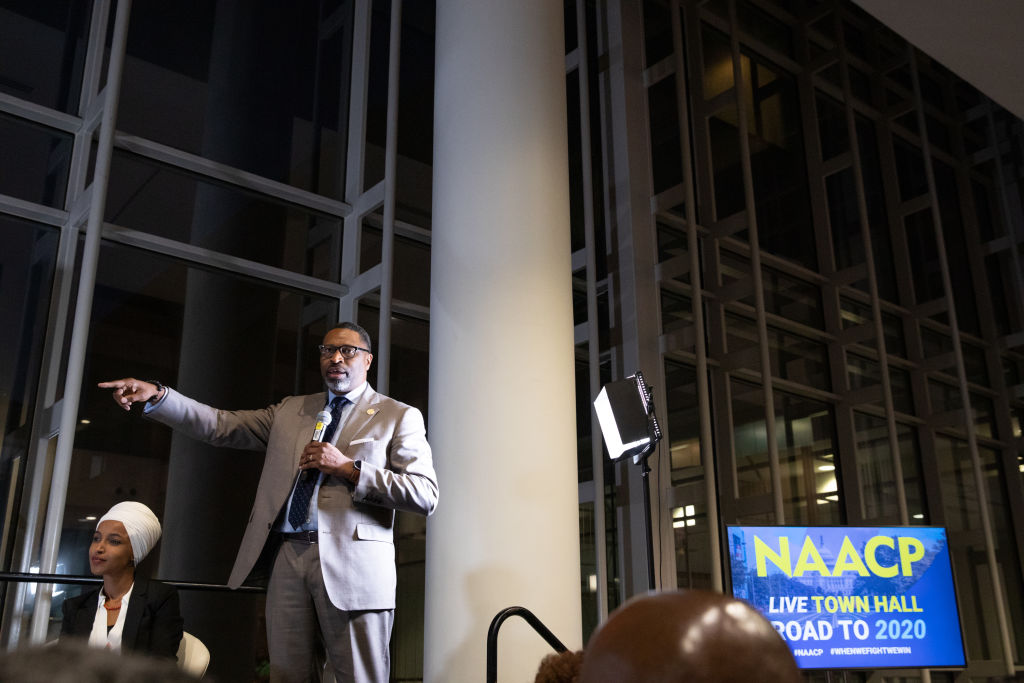 Brown, a former Harvard Fellow, co-founded the Black Voters Matter Fund, a crucial political machine that focuses on getting Black people registered to vote as well as policy and organizing, because of such low turnout of Black voters in the 2016 presidential election. 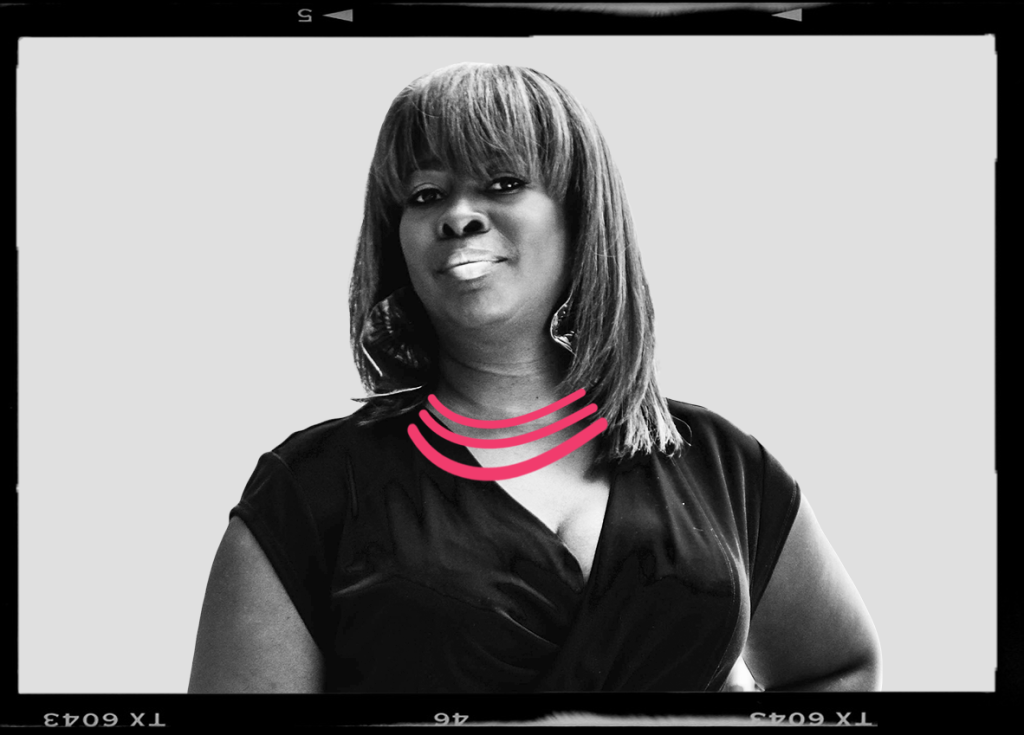 Abrams, who rose to national political fame after her candidacy for Georgia governor fell short in the 2018 midterm elections, has carved out an impressive career in voting rights activism before she declared her candidacy for the same race this year. Specifically, she founded and chaired her Fair Fight organization after being on the wrong end of aggressive and partisan voter suppression. As a result, Fair Fight was started to encourage people to vote as well as to make voters aware of their rights at the polls. Abrams and the group were widely credited for helping to flip Georgia blue and secure the electoral college votes Joe Biden needed to defeat Donald Trump in the 2020 presidential election. 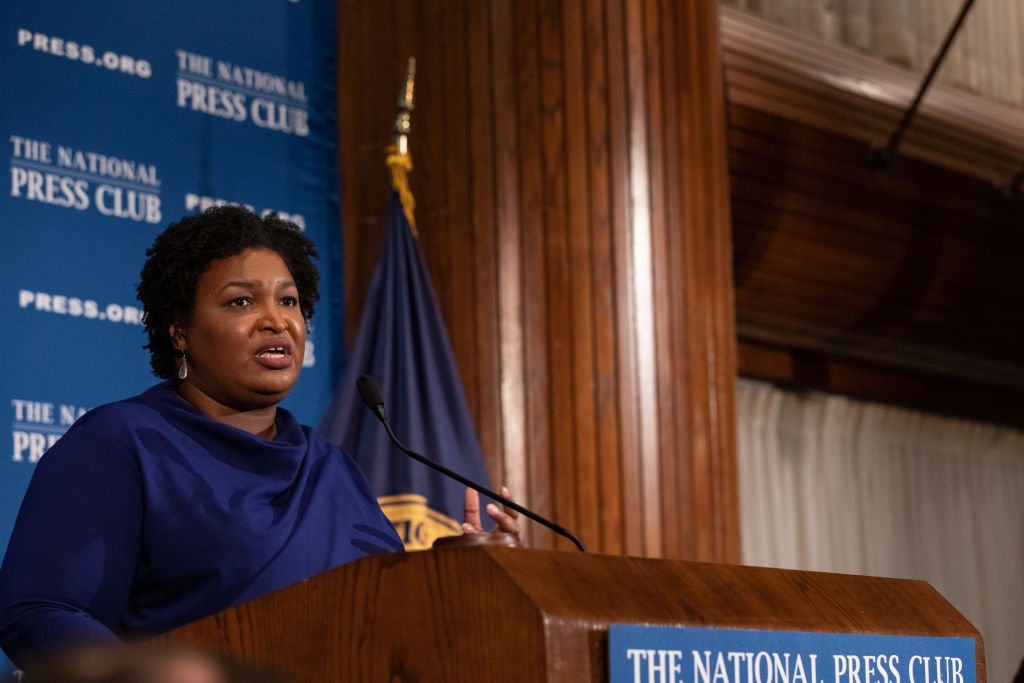 What The Supreme Court’s Alabama Redistricting Ruling Means For Black Voters, And The 2022 Midterm Elections

Your Gas Stove Might Make You (and the Planet) Sick 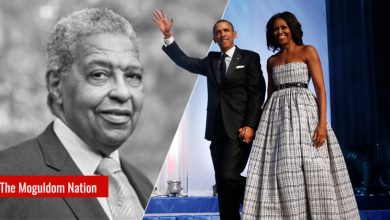 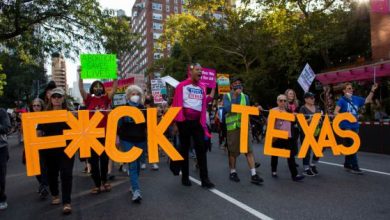 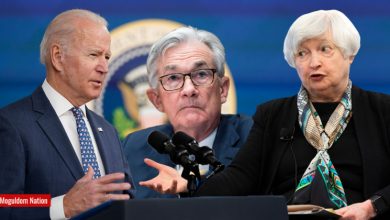 5 Things To Know How They Missed It 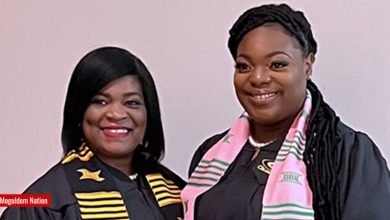