Titled “Mama Goes to Market,” the piece was included in the “Contemporary Curated” series, co-curated by the rapper himself. He handpicked nine of the works sold in the collection, choosing each piece because “they all had an African feeling about them.”

“Whether they were created by African artists or not, they all share in this essence,” Skepta explained in a statement. “In one way or another, they triggered powerful dialogues with my painting too.”

Skepta Created The Artwork in A Week

Skepta created his debut painting in seven days during the pandemic. “I did it because I was just super-frustrated in my house,” he told the Financial Times. Back in spring 2020, his performances were all canceled due to lockdowns. “I guess I was just so used to expressing myself all the time, every two days, out doing a show somewhere new.” He wasn’t “gonna write a song about lockdown and staying in. So I just ordered the oil paints and the canvas.”

The result is “Mama Goes to Market,” inspired by childhood memories of Nigeria. The “Praise the Lord” hitmaker held on to the picture for a year before taking it to a Givenchy pop-up, where it was tagged by Chito, Slawn, and Goldie. The reaction to the painting was so good that someone suggested he should contact Sotheby’s and put it on the market.

While the buyer remains unknown, before the sale, Skepta had his hopes on who would purchase it. “Honestly? Jay-Z,” he revealed when asked who he wanted to buy the painting. “Because he’s very into his African art. Him, or Dave Chappelle.”

In addition, Skepta linked with Denim Tears to produce a range of merch inspired by his painting. The collection includes hand painted tees, a tote bag, a hoodie, a scarf, and jeans.

Feeling Down? You May Need to Change The Time You Eat 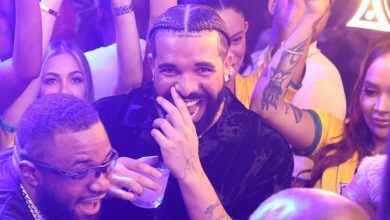